Interview with Bengt Westman, Managing Director at the AFAB refuelling depot at Stockholm’s Arlanda International Airport. Before your next flight, take a moment to consider how your plane has been refuelled – and the steps taken to ensure that fuel is 100% free from any contaminants.

Today, jumping on a plane is such an everyday occurrence that we take it for granted we will arrive as planned. Fortunately, there are professionals out there who make it their job to ensure every flight takes off and lands safely. Dedicated people such as Bengt Westman, for example, who is Managing Director of the refuelling depot at Stockholm’s Arlanda International Airport. 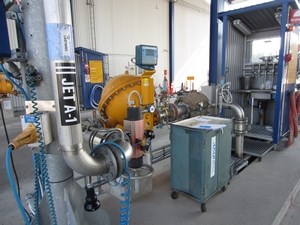 Close up of the systems at a tanker loading station.
Note the pipework – stainless steel is used on
all pipes up to 300mm.
“Statistically, airplane travel is a very safe method of travelling,” he states when Valve World visited his fuel depot when passing through Arlanda Airport. “Obviously the planes themselves are designed and maintained to a very high standard. Then there is the built-in system redundancy – passenger jets are manned by two pilots, there will be at least two engines, and moreover all key hydraulic and electrical systems which control the plane are duplicated. So do you know the one potential weak point? The aviation fuel which is pumped into the tanks before take-off. If the fuel is dirty the pilot cannot simply switch to an alternative fuel supply. This is why depots like ours pay such a huge amount of attention to fuel quality at all stages.”
To give a better understanding, Mr. Westman kindly outlined how aviation fuel gets from the refinery to the plane. “The fuel which goes into planes at Arlanda Airport could have been purchased from any number of refineries around the world. It arrives by ship at a tank farm further up the coast of Sweden from where we buy it. We then transport it by train to a receiving station at Brista There the tankers are connected to a pipeline which brings the fuel to our depot. Here it is stored in one of four large tanks. From the depot fuel is pumped to a hydrant which is connected to all the airport gates. Probably 85% of the fuel we sell is delivered this way. The remainder is taken to the planes by road tankers. That can be necessary for planes which, for space reasons, cannot park at a gate.”
The aviation fuel is subjected to constant checks at every stage of the process outlined above, explains Mr. Westman. “For example, operators can allow a couple of litres of aviation fuel to swirl into a glass vessel. As the liquid settles the operator can easily run a visually check for any impurities or water. If and only if the quality is determined to be ‘bright & clear’ does the operator allow that fuel to pass along the system.” Mr. Westman proudly notes that stringent checks run at the point of purchase means that substandard fuel never reaches the depot. Still, his operators conduct multiple tests diligently every day and for good reason. “For example, all aviation fuel contains water molecules. That is not a problem as such. But if that water condenses due to temperature fluctuations then the fuel it must not be used before being purified. That’s why we run all the tests we do without fail.”
Materials
When it comes to the materials used for refuelling systems in general, Mr. Westman indicates that a standard steel with an internal coating is quite sufficient. “Take the hydrant for example. As this is kept continually fuel of aviation fuel there is no air or water present to cause rusting. However, pipes under 300mm are made of stainless steel, as at such small diameters it becomes hard to internally coat steel pipes.“
As standard, he adds that all pipes which are buried are connecting using butt welds. Flanges are not preferred on buried joints in order to avoid possible leak paths. Flanged joints are however used for accessible items such as valves and pumps as this facilitates repair and replacement. All flanged joints are inspected twice each day. Any leaks can also be quickly seen by operators in the depot control room thanks to cameras installed throughout the facility.
Pumps
The pumps used to transfer the aviation fuel from the railway tanks to the fuel depot are high flow, high pressure models. However, the pumps used to maintain pressure in the hydrant deliver high flow, low pressure. These pumps turn on and off automatically to ensure the pressure in the hydrant is maintained at a constant 12 Bar at all the 100-plus gates.
The hydrant is set up as a continuous loop, allowing fuel to be pumped either clockwise or anticlockwise. This handy feature means that if part of the hydrant is isolated for maintenance, fuel can still be pumped to all the remaining gates. 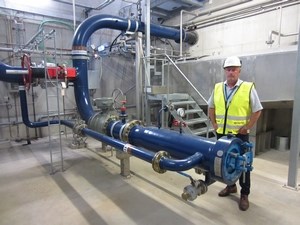 The pig-receiving station at the end of the pipeline
that connects the depot to the railway terminal.
Pigs are used to clean and inspect the coated pipeline.

Valve World extends our sincere thanks to
AFAB’s Managing Director Mr Bengt Westman for taking
the time
to show us all around – and under! –
the fuel depot at Stockholm Arlanda International Airport.
Valves
In all, Mr. Westman estimates that there are probably 1000 valves installed in the pipeline, the depot and throughout the hydrant. These include some rather large double block and bleed ball valves which enable sections of the hydrant to be isolated in the event that maintenance work is needed. This ability to isolate sections of the hydrant also facilitates the pressure testing performed every night to demonstrate that the system is leak-free.
More exotic valves can be found at each of the airport’s gates. Mr. Westman: “The actual refuelling procedure done by a separate company. When a plane needs to be refuelled, one of their lorries drives out to the gate. The lorry has an on-board filter to further ensure the quality of the fuel and also a meter to check how much fuel has been pumped on board. The driver connects the plane to the hydrant using flexible hoses. What is interesting are the so-called pit valves fitted at each gate which have been specially designed for this application. When the driver connects the hose the valve opens automatically thanks to the pressure in the hydrant. When the hose is uncoupled flow stops immediately without a single drop of fuel being leaked.”
Asked about other valves, Mr. Westman notes that each pit valve is connected to the hydrant via an on-off ball valve. This is used to isolate the pit valve should repair or replacement be necessary. He also adds that all automated valves are operated by electric actuators. A battery operated back-up system provides power to safely shut-down the depot and hydrant in the event of a mains power failure.
Moving to future valve plans, Mr. Westman indicates that AFAB has just started to replace the ball valves with butterfly valves. “In our experience eccentric butterfly valves are less likely to leak so we believe this will further improve our HSE performance. Plans are to replace all the ball valves, including the double block and bleed models. Our cost calculations show that installing twin butterfly valves with a separate bleed between them will cost about the same as a new DBB ball valve. However, this means we will have to accept a disadvantage, namely that we will no longer be able to run cleaning or inspection pigs.”
Bringing our pleasant interview to a close, Mr. Westman states again how professional his entire team is. “Fuel quality is fundamental to the safety of an aircraft. Everyone here knows that and that’s why all operators perform all the quality checks without fail. Thanks to their dedication I am utterly confident about commuting to work by plane!”
Valve World Newsletter