Valve purchases by the refining industry will shrink by 40 percent in the next three decades if the midrange of climate change measures are mandated. In the short term, however, the market will bounce back from the level in 2020. 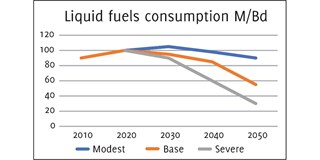 Crudes pumped by the OPEC+ group

Global liquids supplies are expected to climb by 3.5 million b/d on average in 2021, with almost all of the total coming from crudes pumped by the OPEC+ group led by Saudi Arabia and Russia. Seventy percent of crude supply growth could come from the Middle East in 2021 as Saudi Arabia and other core OPEC producers add a combined 800,000 b/d to the market.

Refinery runs rose 2.6 million b/d in November 2020 to 76.1 million b/d, “the largest monthly gain in seven years,” according to the IEA, which attributed the increase to refineries returning “from peak maintenance.” 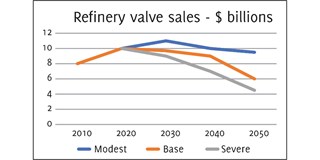 Europe: uneven impact
The expected increase of run rates in 2021 will be lower than the 5.5 million b/d demand growth. However, the refined products stock overhang from last year, when demand dropped by 8.8 million b/d, may be carried this year due to the “relatively high proportion of LPG/ethane” in the demand growth.
US throughputs increased in December and early January but “are likely to stagnate until a stronger demand recovery takes hold” in the second quarter. For 2020, runs fell 2.3 million b/d, at par with the demand drop.
Last year had an “uneven impact” on European refineries, the IEA said, adding that only in Germany and the Netherlands throughputs were back in their seasonal range by the fourth quarter, “but remained significantly below the seasonal levels elsewhere.”
The lowest capacity utilization was recorded in France, where it fell to 55 percent in 2020.
Italy and Portugal also recorded utilization below 70-64 percent and 66 percent, respectively. With new COVID-19 restrictions taking place, first quarter runs are forecast to fall 1.1 million b/d in Europe.

In Japan, refinery runs started increasing in November and were up in December on seasonally stronger winter demand, but activity in South Korea “stagnated” in November when steam cracker maintenance affected demand for naphtha and refinery margins. Runs increased in China by 400,000 b/d in 2020, the lowest annual gain in four years, but still outperforming other countries.
India’s state-owned refineries that serve the domestic market were back to their yearearlier utilization whereas the export-oriented ones retained lower rates. Runs in Saudi Arabia averaged 68 percent in 2020 but are expected to increase to 77 percent in 2021. Russia’s throughput was 320,000 b/d down in 2020, outpacing the 150,000 b/d demand decline.
Decline in the long term
Oil consumption is slated to decline substantially in the next several decades. Climate change reversal is one of the big drivers. IEA, BP and other sources on which the industry relies are predicting that by 2050, oil consumption will be down from as little as just 10 percent from the 2020 level to as much as 65 percent. A median forecast is for a 45 percent reduction.
Refinery valve revenues worldwide are presently just under USD10 billion. In the future valve sales to refineries will be reduced more slowly than refinery output. By 2050 McIlvaine estimates refinery valve revenues of USD 6 billion down from the present USD10 billion level. (1)
The biggest factor in long-term refining shrinkage is the advent of the electric vehicle. General Motors is setting a worldwide target to end sales of gasoline and dieselpowered cars, pickups and SUVs by 2035.GM’s plan marks one of the auto industry’s most aggressive steps to transform their portfolio to electric models that currently represent a tiny fraction of overall sales.
The 2035 “aspiration” would put GM on the same timeline with the state of California, and an identical or similar path to several countries with plans to phase out sales of internal-combustion vehicles.
About the Author 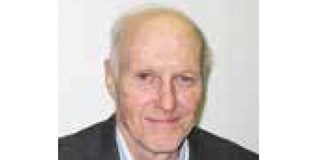 Robert McIlvaine is the CEO of the McIlvaine Company which publishes Industrial Valves: World Markets. He was a pollution control company executive prior to 1974 when he founded the present company. He oversees a staff of 30 people in the U.S. and China.
http://www.mcilvainecompany.com
Factors affecting the refinery valve market
One factor which will positively impact the market is the move to smart valves. There will be a substantial investment in remotely operating valves which are more effective in enhancing refinery performance.
Another factor will be fugitive emissions control. The perimeter monitoring for multiple pollutants will continue to reveal excess leakage and the need for valve upgrades.Refineries will remain major purchasers of valves. The owners are in general companies which are purchasing valves for other applications. So these companies will retain their high ranking as valve purchasers.
(1) Industrial Valves: World Marketspublished by the McIlvaine Company
Valve World Newsletter