A report released by Bloomberg New Energy Finance (BNEF) in June claims that about half the world’s power will be generated by wind and solar resources by 2050. Meanwhile power generation from coal will drop more than 70% from today’s levels, according to research from energy analysts in the New Energy Outlook 2018 report.

Text sourced from Bloomberg New Energy Finance
The report looked at the changing face of the power generation industry and how it will change by the year 2050. Wind and solar are set to surge to almost “50 by 50” – 50% of world generation by 2050 – on the back of precipitous reductions in cost, and the advent of cheaper batteries that will enable electricity to be stored and discharged to meet shifts indemand and supply. Coal shrinks to just 11% of global electricity generation by 2050.
Setting the scene
Focusing on the electricity system, the New Energy Outlook (NEO) combines the expertise of over 65 in-house country and technology-level specialists in 12 countries to provide a unique assessment of the economic drivers and tipping points that will shape the sector to 2050. Since the 1970s, fossil fuels have commanded a consistent 60-70% share of the global power generation mix. However this 50-year equilibrium is coming to an end, as cheap renewable energy and batteries fundamentally remake electricity systems around the world, the report states.
NEO 2018 sees USD $11.5 trillion being invested globally in new power generation capacity between 2018 Power gen to undergo radical change by 2050 and 2050, with USD $8.4 trillion of that going to wind and solar and a further $1.5 trillion to other zerocarbon technologies such as hydro and nuclear. Cheap renewable energy and batteries fundamentally reshape the electricity system, as we shift from two-thirds fossil fuels in 2017, to two-thirds renewable energy in 2050.
50 by 50
By 2050, wind and solar technology provide almost 50% of total electricity globally – “50 by 50” – with hydro, nuclear and other renewables taking total zero-carbon electricity up to 71%. By 2050, only 29% of the electricity production worldwide is expected to result from burning fossil fuels, down from 63% today.
This dramatic shift to “50 by 50” is being driven by cheap solar photo voltaic (PV), cheap wind, and falling battery costs. The cost of an average PV plant falls by 71% by 2050. Wind energy is getting cheaper too, expected to drop 58% by 2050. PV and wind are already cheaper than building new large-scale coal and gas plants. Batteries are also dropping dramatically in cost.
Seb Henbest from BNEF says: “We see USD$ 548 billion being invested in battery capacity by 2050, two thirds of that at the grid level and one third installed behind-the-meter by households and businesses. The arrival of cheap battery storage will mean that it becomes increasingly possible to finesse the delivery of electricity from wind and solar, so that these technologies can help meet demand even when the wind isn’t blowing and the sun isn’t shining. The result will be renewables eating up more and more of the existing market for coal, gas and nuclear.” 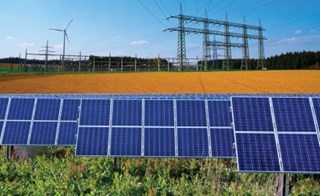 Highlights from the report
Coal will shrink to just 11% of global electricity generation by 2050, from 38% currently. Gas consumption for power generation remains flat out to 2050, despite growing capacity. Gas plays a key role, however, in backing up renewables during extremes and wind and solar generation are at a minimum.
Electric vehicles add around 3,461TWh of new electricity demand globally by 2050, equal to 9% of total demand.
About half of the necessary charging for electric vehicles will be dynamic, taking advantage of times when electricity prices are low because of high renewables output. As renewable penetration rises and existing large-scale plant retire, new flexibility becomes a top priority. Dedicated flexible capacity grows almost six-fold, rising to 15% of the total power mix by 2050. Batteries make up around 44% of this and account for 70% of new build, along with demand response and peaker gas.
Want to know more?
The summary of New Energy Outlook (NEO) 2018 is available to read free of charge on the Bloomberg website https://about.bnef.com/new-energy-outlook/
Country highlights
Europe – By 2050, renewables make up 87% of the electricity mix, with wind and solar playing a dominant role. Cheap renewables, flexible demand and batteries combine to shift the European power system away from fossil fuels and nuclear to one built around variable renewables and emissions-free energy.
Germany – Germany sees rapid change to 2025 with coal and gas generation falling 29%, nuclear phased-out and renewables topping 70% of generation. Battery deployment helps renewables reach higher penetration but, in the absence of policy intervention, cheap lignite is likely to remain in place. By 2050, Germany is running on 74% wind and solar and 84% renewables, but it has the highest emissions in Europe.
United Kingdom – The UK’s plan to close its remaining coal-fired power stations by 2025 reduces the role of fossil fuels in generation to 12% by 2030. At the same time, growth in high capacity factor offshore wind pushes renewables up to 73% of generation. By 2050, the UK has added 158GW of wind and solar, as well as 49GW of batteries and renewables provide 83% of generation.
United States – The US electricity system continues to replace aging coal and nuclear with cheaper gas and renewable resources, assuming there is no lasting federal policy intervention to prevent their retirement. Coal and nuclear are pushed out by age and economics, such that by 2050 both nuclear and coal have almost disappeared from the electricity mix. Batteries grow in significance from around 2030, supporting renewables penetration, which reaches 55% in 2050. In that year, emissions are 58% lower than they are today.
China – China sees peak coal generation and peak emissions in 2030, as the world’s biggest electricity system reaches 39% renewables penetration with 23GW of batteries. China will continue to be the largest market for wind and solar, which grow from 7% to 46% combined of total generation by 2050. By that time China has 1.1TW of solar PV and 1TW of wind – equivalent to 21% of all the PV and a third of all the wind power installed globally.
India – India has the cheapest new wind and solar anywhere in the world. This poses a profound challenge to the orthodoxy there that coal is forever king. While coal-fired electricity is expected to continue to grow in India in the short to medium term, by 2050 wind and solar dominate, supported by batteries and flexible gas. This pushes India’s emissions 22% below what they are today.
Japan – Japan’s electricity system remains relatively coal-heavy for much of the next 33 years, even as strong renewables growth and nuclear restarts squeeze gas out of the mix. By 2050, renewables account for almost three quarters of electricity generation, with PV supplying 43%, up from 6% today. Negative demand growth and strong consumer uptake of small-scale PV and batteries make Japan one of the more decentralized power systems in the world, with 34% of installed capacity behind-the-meter.
Australia – Australia’s power system is on track to become one of the two most decentralized in the world, with consumer PV and behind-themeter batteries making up 44% of all capacity. This represents a dramatic turnaround from the largely coal-fired system of today. Wind, PV and batteries form the backbone of this new system, where coal has all but disappeared.
South Korea – South Korea’s generation mix shifts from 72% coal and nuclear in 2017 to 71% gas and renewables in 2050. Utility-scale batteries and peaker gas plants become a crucial part of Korea’s future power system, supporting growing offshore wind and PV, as the country’s aging coal and nuclear plant retire.
Valve World Newsletter