Earlier this year the first phase of the Southern Gas Corridor was launched. This 40+ billion USD project is intended to decrease the EU’s dependency mon Russian gas for its energy needs. The final part of the megaproject, the Trans Adriatic Pipeline (TAP), still needs to be constructed in the following years.

On May 29th, the president of Azerbaijan, Ilham Aliyev, officially inaugurated this megaproject by opening a valve at the Sangachal Gas Terminal, located 40 kilometres south of the nation’s capital Baku. Azerbaijan will initially be the source for natural gas to be transported via various pipelines to Europe. By establishing this route, the EU aims to become less dependent on Russian gas for its energy needs.
As Aliyev puts it during the ceremony, “With this project we are creating a new energy map of Europe”. The strategic importance of the SGC was represented by various Western dignitaries as the EU wants to be less dependent on Russian gas. Besides investing in alternative energy sources, such as renewables, the EU clearly sees natural gas as a ‘staple’ for decades to come, otherwise it wouldn’t have invested billions (in loans) in the project.
Massive project
The SGC is a massive project. It is divided into three linked pipelines spanning more than 3,500 kilometres (see box text) that will transport gas from Azerbaijan’s Shah Deniz 2 natural gas field across Azerbaijan, Georgia, Turkey, Greece, Albania, and the Adriatic Sea to Italy. From there, the gas can be transported via (existing) gas pipelines to the northwest of the continent. In the initial first phase, 6 billion cubic meters (cbm) of gas will be transported from Azerbaijan to Europe via Turkey. After 2020, this volume will increase to 10 bcm per annum and further expansion is planned to take place after 2026. By that time, the Azerbaijan gas reserves will not be sufficient to meet increased demand from Europe, which means that the country will have to develop a network hub for natural gas from other regions, such as Iran or Turkmenistan.
Extensive preparations
Zooming into the Trans Adriatic Pipeline, this part is in the construction phase. The actual construction of the pipeline and related facilities will take place in stages over a period of three to six months. As the construction will require extensive preparations, the total project time will be between 12 and 24 months; it is expected to be fully operational in 2020.
Once built, the onshore pipeline itself will be buried at least one metre beneath the ground. Only facilities such as the pipeline receiving terminal, compressor and block valve stations will be above ground. The pipeline itself, and all facilities, will be designed and constructed to have minimum environmental impact, according to TAP AG, the consortium with members such as BP, SOCAR and SNAM (amongst others, ed.). 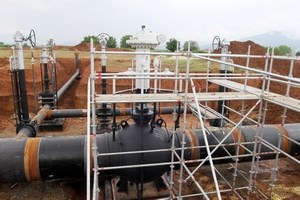 Physical reverse flow
As the Southern Gas Corridor is expected to be scaled up in order to accommodate the transport of larger volumes to Europe, the developers behind TAP have integrated flexibility into the pipeline design. TAP’s initial capacity of 10 billion cubic metres (bcm) of gas per year is equivalent to the energy consumption of approximately seven million households in Europe. In the (near) future, the addition of two extra compressor stations could double throughput to more than 20 bcm.
The pipeline will also have the so-called ‘physical reverse flow’ feature, allowing gas from Italy to be diverted to South East Europe if energy supplies are disrupted or if more pipeline capacity is required to bring additional gas into the region. TAP could also be linked to existing and planned pipeline infrastructure in South East Europe, transporting gas to Greece and/or Bulgaria.
Strategic significance
In June 2018, all three turbo compressors were installed at a brand new compressor station in Fier, Albania. The turbo compressors, supplied by Siemens, are centrifugal and able to compress gas up to 145 bar, from an inlet pressure of 59 bar. The installed power of each of the 3 compressors in the station is 15 MW.
The Albanian Infrastructure and Energy Minister Gjiknuri stressed the importance of TAP for the national economy and its strategic significance for the future of the country. According to the Minister, “TAP will have a positive impact on the country’s gasification and its energy sector in general.” The Minister stated that “TAP was the first energy project of this scale to be implemented in Albania and its progress was impressive.” For the initial stage (in 2020 when the construction is finalized), the system capacity can supply approximately 10 bcm per annum. The pipeline capacity could double to 20 bcm/a (future expansion), using the same pipeline infrastructure, by adding compression facilities. 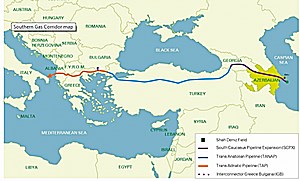 Overview of the Southern Gas Corridor,
spanning more than 3,500 kilometres.

Three major pipelines
The Southern Gas Corridor is comprised of three pipelines: the South Caucasus Pipeline (SCP), the Trans Anatolian Pipeline (TANAP) and the Trans-Adriatic Pipeline (TAP). The SCP is 692 kilometres long, originating in Azerbaijan (442 kilometres) and going into Georgia (248 kilometres). The initial capacity of the pipeline was 8.8 billion cubic metres of gas per year.