In terms of product development, the major trends in geothermal optimizing life cycle costs, simplify maintenance (e.g. regarding pump exchange for overhaul) and develop and construct high-performance equipment that can cope with high-pressure, high-temperature and aggressive media.

Article by Lucien Joppen*
___
As mentioned in the feature article on pages 68, 69, 70 and 73, geothermal energy has many advantages over other (renewable) energy sources such as a
continuous supply and less land-use. On the other hand, the temperatures and pressures need to be regulated safely to safeguard workers, the environment and equipment in geothermal power stations.
Given the critical conditions, due to deeper drilling and subsequent temperatures and pressures, the API 6A-standard for Wellhead and Christmas Tree
Equipment (also available as ISO 10423) has become the norm in the geothermal sector.
In general, two temperature classes are in effect: the X for temperatures up to 180 degrees Celsius and Y for temperatures up to 345 degrees Celsius.
Choices in terms of materials, pressure classes and function of the wellhead (control) depend heavily on the geological conditions.
Rise of the ball valve
As for the valves used in wellheads, there are roughly two options: either a gate valve or a metal-seated ball valve. It looks that the ball valve has become more and more accepted in the geothermal sector at the expense of gate valves, according to Hartmann Valves.
There are several reasons for the rise of the ball valve in geothermal wellhead design. Ball valves facilitate a double barrier option independent of each other: an extra safety feature.
Gate valves also tend to be prone to scaling, due to dissolved minerals that make their way up to the wellhead and crystallise when temperatures and pressures are decreasing. As these scalings accumulate, this accumulation hinders the proper closing of the gate. Ball valves are better suited to combat the effects of scaling as the inner body is sealed off hermetically. Deposits (due to particle accumulation) on the ball are removed by the edge of the seat ring. As a result, ball valves require less maintenance and repair and generally require less down-time, increasing the capacity of the geothermal power plant. 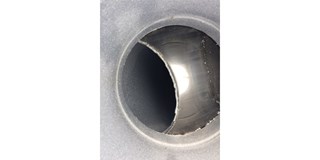 Scaling requires high-performance equipment
such as metal-to-metal seated ball valves
which are reliably operating under these conditions.

Double in size in the next ten years
Flexibility in wellhead design for geothermal energy is also a significant factor.
A modular design facilitates easy maintenance, repair-or-replace, for example of the pumps. An eccentric pipe connection enables the use of scaling and corrosion inhibitors and makes room for electrical cables to power pumps etc.
The ability to change from production to injection and vice versa also comes into play in the wellhead’s design. In some cases, this change needs to take place to maintain or even increase process efficiency. This means that all components (actuation, automation, standardised interfaces, etc.) in the wellhead should be interchangeable for both operational functions (injection, extraction).
To conclude, geothermal energy is an attractive (and growing) market that requires experienced and flexible suppliers and high-performance equipment. Hartmann expects this market to double in sales in the next ten years due to projected project development and – in general – an increase in demand for renewable energy.

Traunreut in southeastern Bavaria is the home of the more challenging geothermal projects in Germany. The project, ordered by GKT Geothermische Kraftwerksgesellschaft Traunreut GmbH and brought online by the Italian company Turboden, started in 2011 and was completed in 2016. The facility generates 5.5 MW electricity and 12MWth based upon a relative low-temperature resource of approximately 120 degrees Celsius.

Drilling as deep as 5 kilometres, the throughput is high (165 litres per second) and contains aggressive media (gases, crystallised salts, etc.). These conditions require adequate valve design and material selection. The Hartmann wellhead is equipped with a metal-seated ball valve (API 6A/3000 psi), able to withstand pressures up to 207 bar.
Roughly, 60 kilometres to the west, Munich has the ambition to become self-sufficient for  its district heating on renewable energy, mainly from geothermal sources (see also the article on page 40). Hartmann Valves supports this ambition by delivering wellheads with integrated ball valves as a secure interface between the well and the geothermal plant on the surface. Also, Hartmann Service is assisting with installation and maintenance work such as the regular exchanging of pumps.
* partly based upon previous articles written by Hartmann Valves
Valve World Newsletter