The HyStock power-to-gas installation in the northern Dutch province of Groningen is a multipronged project that aims to increase the efficiency of solar energy to supplement the country’s natural gas supply, and ultimately, to help create a ‘hydrogen economy’ in the region. 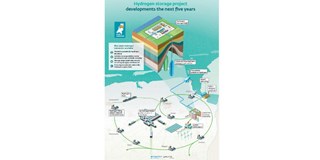 The HyStock pilot program, currently underway near the city of Veendam and completed in May 2020, involves the conversion of solar energy into hydrogen, which can then be distributed for use in various applications. Owned and operated by Gasunie subsidiaries EnergyStock and Gasunie New Energy, the program represents an early step in demonstrating the feasibility of a ‘hydrogen economy’ in Groningen.
HyStock is the first power-to-gas facility in the Netherlands, but its primary function has much in common with other power-to-gas projects in Europe. Four thousand five hundred solar panels (capacity: 1 MW) will feed the HyStock project with sustainable electricity via TenneT’s high-voltage electricity grid.
After delivery to the facility, the high voltage electricity will be used to separate the hydrogen and oxygen from water (electrolysis).
Unmatched storage capacity
According to Aljazeera, the world’s largest battery – currently in service at a South Australian power grid – has a capacity of 100 MWh. While impressive, 100MWh pales in comparison to just one of the salt caverns below the HyStock facility, which can hold up to 240,000 MWh, according to Henk Abbing, Managing Director of EnergyStock. Abbing was quoted in an EnergyStock press release stating that the storage of hydrogen gas offers a viable alternative to store sustainable energy in large quantities. Indeed, the underground salt caves can store enough hydrogen gas to keep the entire country of the Netherlands warm for three weeks, experts say.
The resulting hydrogen is further processed via compression on-site and can be stored in portable cylinders or injected into salt caverns some 1km below the facility. Storing the resulting hydrogen in cylindrical containers allows for easy distribution to endusers in industry, transport, and other sectors. Storage underground and connected withdrawal/injection lines enable HyStock to supply hydrogen directly to the Dutch natural gas grid.

According to various sources, HyStock is one project of many that are endorsing on the path to a ‘hydrogen economy’. New Mobility News reports that wind parks in the North Sea and solar parks on land – the HyStock solar park representing one small portion of the province’s panels – are feeding a high voltage grid.
This grid, in turn, connects with Scandinavia and Germany, providing ample renewable electricity that can be converted into hydrogen on a mass scale. The same report quotes Patrick Brouns, a Groningen deputy, as saying that the HyStock project represents the dawning of a new era.
EU Support
Green hydrogen is central to the Dutch Climate Accord and the European “Green Deal.” As such, the Northern Netherlands has been selected by the Fuel Cells and Hydrogen Joint Undertaking (FCH JU) of the European Commission to start the negotiations for an EU grant agreement of 20 million euros. The grant is meant to develop a fully-fledged green hydrogen value chain in the Northern Netherlands.
“Next year there will be hydrogen production sites of 20, 40 and 100 MW. In the next ten years 2.8 billion Euros will be invested in hydrogen in Groningen,” Brouns adds. “We can save 15,000 jobs by changing to hydrogen and create even new ones. In our vision, we will be CO2-negative by 2050 and capture CO2 from the air to create ‘green’ plastics.”

The renewable hydrogen that will be produced will also need to be consumed. In the years leading up to the inauguration of HyStock, the High V.LO-City project began a pilot program that promises to be a driver of hydrogen demand. The project aims at facilitating the deployment of fuel cell electric buses and their related hydrogen refuelling infrastructure in European cities, and in 2017 it launched a new demonstration site for fuel cell electric buses in Groningen. The Groningen site is the fourth deployment site in High V.LO-City after Aberdeen, Antwerp, and San Remo.
The High V.LO-City project, if implanted at a larger scale throughout the province, would be a significant consumer of the hydrogen set to be produced at HyStock. So far, Dutch bus operator QBuzz has deployed two Van Hool fuel cell electric buses, substituting standard diesel buses.
Gas grid
In the broader context of Dutch energy, the HyStock project is not only a sign of a forthcoming ‘hydrogen economy’ in the province of Groningen, but is also symptomatic of the decline of natural gas production in the giant Groningen field. The Groningen gas field, “the mainstay of Dutch gas production” for over 50 years, according to Oxford Energy, “will be phased out as quickly as possible and no later than 2030.” This is due to aggressive government policies on climate change, along with the broader environmental concerns that have accompanied gas production in the region.
Feeding hydrogen into a gas grid
In the Netherlands, network operators Alliander, Enexis Groep and Stedin have built a conventional natural gas grid to enable research on the possible applications of hydrogen. This grid has been constructed with current natural gas requirements, standards, materials and components. The building, testing and demonstrating of the converted natural gas grid provides them and their supply chain partners with knowledge, practical experience and collaboration on the distribution of hydrogen through the existing infrastructure. Sustainably produced hydrogen can be an alternative to achieve CO2 reduction goals. This applies in particular to homes and districts that are not suitable for other natural gas-free solutions, such as electric heat pumps or a heating network.
With a multi-billion Euro gas infrastructure that spans 12,000 kilometres in the Netherlands already in place, reuse and repurposing are an ideal alternative to obsolescence (see box text Feeding hydrogen into the gas grid).
Gasunie’s top man, Han Fennema, wants to use the existing network to create “the backbone of a hydrogen network for the entire country. We can do that for 90 per cent by reusing existing pipelines, though the rest we have to build,” Fennema told Dutch newspaper De Telegraaf. His colleague, Director Strategie at Gasunie, Hans Coenen, agrees. “There is a network worth billions of Euros. Let’s keep on using it for sure,” Coenen says in another paper.
Valve World Newsletter