In its 2015 brochure, Sadara Chemical Company printed its ambition to “change the game in the Middle East’s chemical industry”. Saudi Arabian Oil Company (Saudi Aramco) and American chemical giant The Dow Chemical Company (Dow) have joined forces for the venture.
“Sadara uses new feedstock, brings new technologies and other first-time processes to the region in a large, highly-integrated manufacturing complex that is the largest ever built in the world in a single phase. It will produce a differentiated slate of plastics and chemical products.” (source: sadara.com).
Sadara will produce more than three million tons of high-value performance plastics and speciality chemical products annually. At the heart of Sadara is a mixed-feed cracker (MFC), cracking ethane gas and naphtha liquid feedstock to produce chemicals for the site’s other facilities.
TechnipFMC has contributed to the 1500 KTA MFC. It’s scope included the technology and front-end engineering design (FEED) for the cracker and the design of the 12 furnaces. The furnaces crack both ethane (gas) and naphtha (liquid); a number also switch between gas and liquid feedstock, based on market demand. Sadara is the only facility in Saudi Arabia that can crack ethane/LPG and naphtha simultaneously.
Focus on value
Sadara features four polyethylene production units that came on-line between late 2015 and early 2017. More than thirty-two polyethylene products have been qualified to-date. Sadara’s speciality chemicals portfolio includes propylene oxide, propylene glycol, ethylene oxide, glycol ethers, amines, isocyanates and polyether polyols.
The focus on downstream processing flows clearly from KSA’s Vision2030-plan outlining its aims to transform socially and economically. Specifically for the economy and oil and gas sector, KSA wants to get more value out of hydrocarbons by moving into speciality chemicals and polymers. Turning from the power sector to the downstream sector Saudi Arabia has increased its refining capacity significantly in recent years. The country’s biggest motivation has been its forced import of expensive petroleum products as domestic demand outstrips refining capacity in products such as gasoline and diesel.
Many policymakers still consider investment in refining as a critical step towards creating added value by converting crude oil into refined products and establishing the link between the upstream and petrochemicals. (Source: Oxford Institute for Energy Studies).
Downstream activities
This provides opportunities for diversification and downstream integration into the full value chain, including developing new industries. Saudi Arabia wants its petrochemical industry to diversify its feedstock mix away from ethane towards refined products such as naphtha, butane, and propane. With an increase in feedstock availability and diversity, more sophisticated petrochemical products can be produced that are needed to extend the value chain and generate employment.
For this reason, Sadara is located next to a large complex, Plaschem Park: a 12km2 industrial park in Jubail Industrial City II, dedicated to downstream chemical and so-called conversion industries.
Within PlasChem Park, several clusters are active in certain DSP-domains, such as hydrocarbon resins, products derived from ethylene oxide/propylene oxide, polyurethane and plastics. These clusters are designed to attract investments from third-parties for downstream applications such as the production of oil and gas chemicals, construction materials, auto components, animal feed, paints and coatings, and home and personal care products. 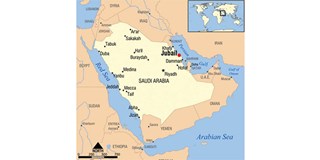 Global cooperation
Back to the mega-project; the physical scale of Sadara’s build is impressive. Vice President for ABB Energy Industries, the project’s main automation contractor, Swarandeep Singh reports that the site includes “more than 2,500 km of piping, 5,400 km of cables, enough to link Jubail with London, and around 114,000 tons of steel structure, enough to construct one and a half Golden Gate bridges. The 700,000 m3 of concrete at Sadara could build two causeways between Saudi Arabia and Bahrain”.
A project of this size called for global collaboration. Fifteen independent engineering procurement and construction (EPC) contractors (including Technip FMC, ed.) from eight different countries worked on the construction. During the busiest construction phase, over 60,000 people were present on-site.
The entire project presented challenges linked to the vast range of contributors and its physical size. The goal to “get it right the first time” posed an additional pressure to every element of this build. Singh reports 18 distributed control and safety systems including 150,000 inputs/ outputs, and a further 64 consoles spread over five operator buildings to support maximum productivity across the entire site.
Obstacles
Sadara has also broken the mould in terms of timely realisation. The predicted timescale for a build of this size would be 15 to 20 years; this chemical complex is now fully operational after eight years. However, as with all large-scale construction projects, the Sadara Chemical Complex faced obstacles. Singh refers to ABB’s experience with the challenges posed by the project: “Of the 26 plants at Sadara, 14 were new to the region. So, finding enough experienced operators and maintenance engineers was a challenge”. ABB solved this by providing simulation tools to enhance operators’ skills.
The invested interest of the global community in the plant’s development presented further logistical and practical issues.
For example, a clear and concise control system had to be developed if single phase construction was to be achieved. Due to the varied practices of each EPC contractor, methods were streamlined to work simultaneously on all 26 plants. This required design consistency, the prevalence of best practices, and a set of standardised systems. A FEED study initiated the latter.
Digitalisation
ABB adopted a collaborative approach and worked with stakeholders to review each potential standardised procedure. Singh writes “we succeeded in most cases. If we experienced inevitable delays or issues, we created workarounds based on calculated assumptions to stay on track. This approach allowed us to avoid having to rework after testing”.
The project’s further challenges included the digitisation of the plants, achieved through virtualisation, cloud-based engineering, the introduction of digital twins, and unit-based control. A partnership with French specialists in training and engineering dynamic simulators, Corys, saw the creation of live thermodynamic process models on a software platform.
Their combined work with ABB resulted in a digital process model of the plant, allowing the ABB team to test their automation system, and the operators to check how they could shut down the plant in the case of disturbances, even pre-construction. This MO prevented troubleshooting later and saved additional time and energy.
In short, Sadara and PlasChem Park are designed to propel KSA’s economy forward. As the global O&G and petrochemical sector are experiencing tough times, partly through the pandemic, this will be a challenge for the Kingdom to master.
Valve World Newsletter