AUMA has developed new block stop technology for its worm gearboxes. The actuator manufacturer invests heavily in ongoing R&D:  as part of this process, an engineering initiative has been taken to aid actuator installation. The company’s proven end-stop nut design avoids loads which may cause the gearbox housing to break. With this solution, end stops are loaded only with input torques and not with a multiple output torque. As a result, even in the event of an end-stop breakage, the gearbox remains operable. AUMA’s new block stop design considerably enhances the end stop process. Blockages in the end stops, caused for example when the nut is operated with excessive torque in the event of limit switching failure, are now impossible. By applying safety wedge discs, a design initiative patented by AUMA, the required torque to unseat the end stop nut is just 60 % of the torque previously applied to approach the end stop. A technical paper to support this design initiative entitled ‘Worm gearboxes for valve automation’ is available from AUMA. 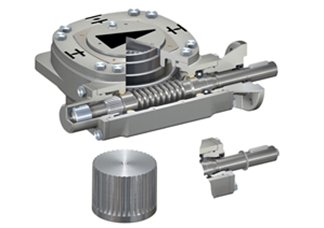